It’s that time of year again in Mexico, when walnuts, peaches and pomegranates are in season and chiles en nogada, a famous patriotic dish sporting the national colors of red, white and green begins to make its appearance on restaurant menus across the country. Hacienda Sisal is no exception, our Mexican restaurant next to The Royal Sands is now serving this emblematic dish associated with Mexico’s Independence celebrations in September and cooked to an traditional recipe from Puebla. Don’t miss this opportunity to try one of Mexico’s most famous dishes.
A masterpiece of Mexican cuisine and one of the dishes that has earned it a place on the World Heritage list in the Intangible Culture category, chiles en nogada is only prepared in August and September. Poblano chilies are stuffed with a savory-sweet mixture of ground pork and beef, dried fruit and spices, served in creamy walnut sauce and sprinkled with pomegranate seeds, coriander and parsley as a garnish.

The origin of chiles en nogada

A classic dish for September, Independence month in Mexico, chiles en nogada is said to have originated in 1821 when General Agustín de Iturbide visited the city of Puebla after signing the Treaty of Córdoba, the agreement that gave Mexico its Independence from Spain. He decided to celebrate his saint’s day in the city: August 28, the day of St Augustine, and the city’s elders held a banquet in his honor.
The nuns of Santa Monica Convent were caught up in the fervor and patriotism of his visit and created a special dish for the dinner, commemorating the birth of a nation. They used seasonal ingredients such as walnuts and pomegranates and, to this day, chiles en nogada are served in restaurants and homes throughout Puebla and Mexico in August and September.
The dish reflects the colors of the Mexican flag, green (chilies), white (walnut sauce) and the red (pomegranate seeds).

While chiles en nogada recipes may vary somewhat between families in Puebla, they all contain the same basic list of ingredients. Poblano chilies are stuffed with a filling of ground pork and beef cooked with chopped dried and fresh fruit (raisins, citron, peach and apple), spices, garlic and onion. The chilies are topped with a sauce made from ground walnuts, almonds and sherry. Pomegranate seeds, chopped cilantro and parsley garnish the dish.

Don’t miss this traditional Mexican dish at Hacienda Sisal and during your stay, why not try the Tequila and Mezcal Pairing Dinner too. 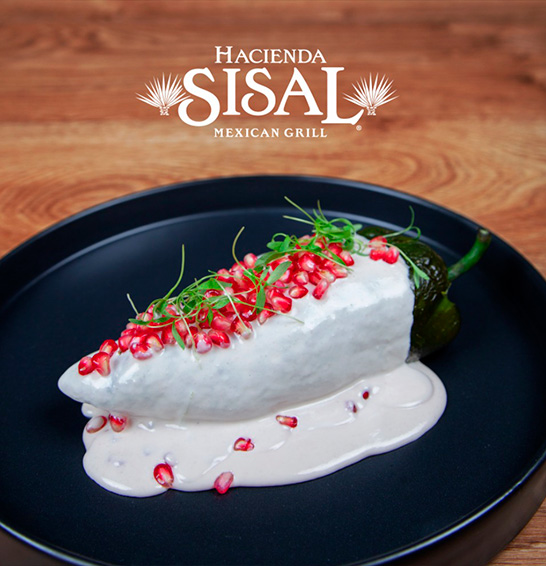